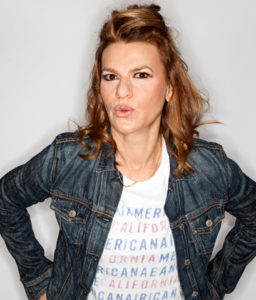 In “Feel the Bernhard”, not unlike Bernie Sanders, Sandy has had it with the 1%. If you’re sick and tired of being held down, join the 99%ers for a revolution Sandy style.  As The New Yorker wrote “Sandra Bernhard teaches the children—all those burgeoning spoken-word artists and monologists—how to perform observational comedy with style, and right on the political edge”.

Bernhard also recently launched her own hugely popular daily show Sandyland on SiriusXM Radio’s new Radio Andy channel (102) headed up by Andy Cohen. Her strong opinions and unique perspective, along with her provocative, spontaneous conversations with a wide spectrum of guests from the worlds of entertainment and fashion have made Sandyland hugely popular.

She debuted “Feel the Bernhard” at Joe’s Pub in New York City during her sold-out six night run, of which TheatreManiawrote….”Bernhard knows what her audience wants, and she has them eating out of the palm of her hand from the second she walks onstage. There’s no greater joy than watching a masterful comedian feed off her crowd and give it right back to them in the form of an evening that’s as hilarious as it is truthful.”

Sandra Bernhard continues to tour nationally and overseas with her new live show, spotlighting her own unique, sharp blend of hysterical insight and outspoken views, with rock-n-roll, cabaret, stand-up and a little burlesque. Bernhard’s show, which also features her band The Flawless Zircons, has been selling out venues in New York City, Los Angeles, Chicago and all points in between.