As you may recall I worked with Tenlegs Arts and Media Network to gather some producers to remix my album. I had a really great response, and added to that group some musicians I deeply respect. here we have it! Tentative Armor Reworks has arrived. I am really so thrilled with how this came out. Christopher Willits at Overlap Studios in San Francisco mastered the tracks. I think he is a genius and felt so honored to have him work on this project as well. Graphical guru John Ong designed the cover art. Always a pleasure to work with that guy! Read on for some information about each of the artists and their process around the work. Oh yeah, you can download the entire album for free right here.

The Prologue II: The Immaculate Concept 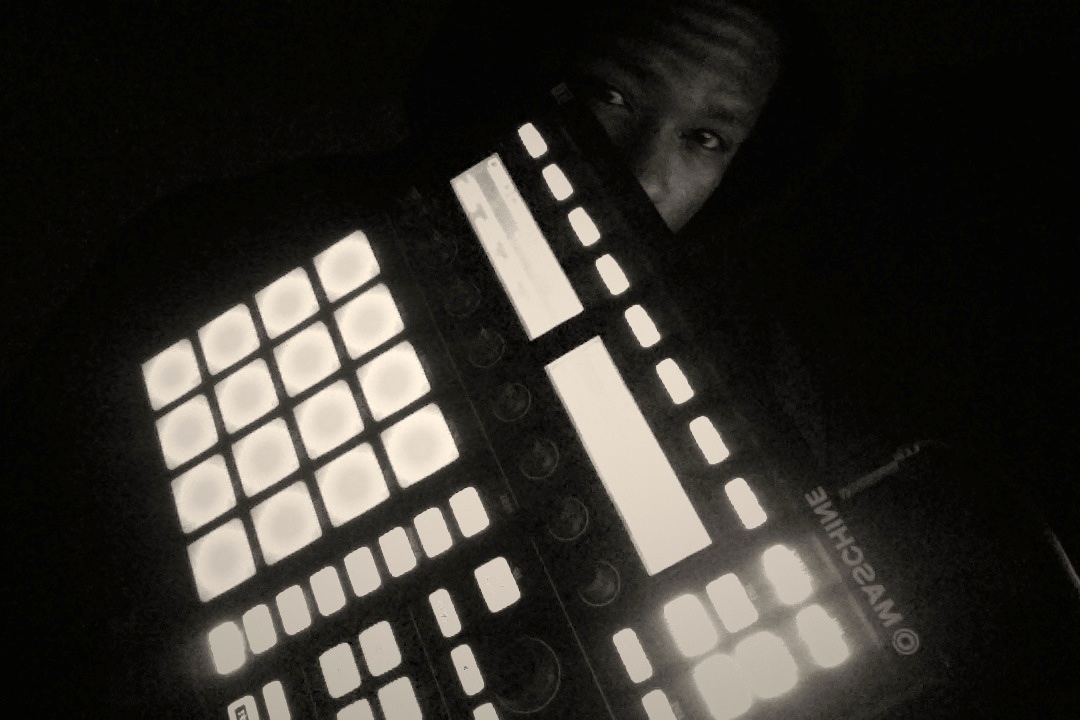 Immaculate 1 is a Music Producer and Audio Engineer out of MD! Graduate apprentice of Drew Lamond at Wrightway Studios and The Recording Connection. Music is life for me and I love to inspire and create. I had no particular approach to the remix, but I did want to give my new drums {Blap kit 6 by !llmind} a Go! Thus, creating the Prologue II.

When Will It Bloom (Known Space Remix) 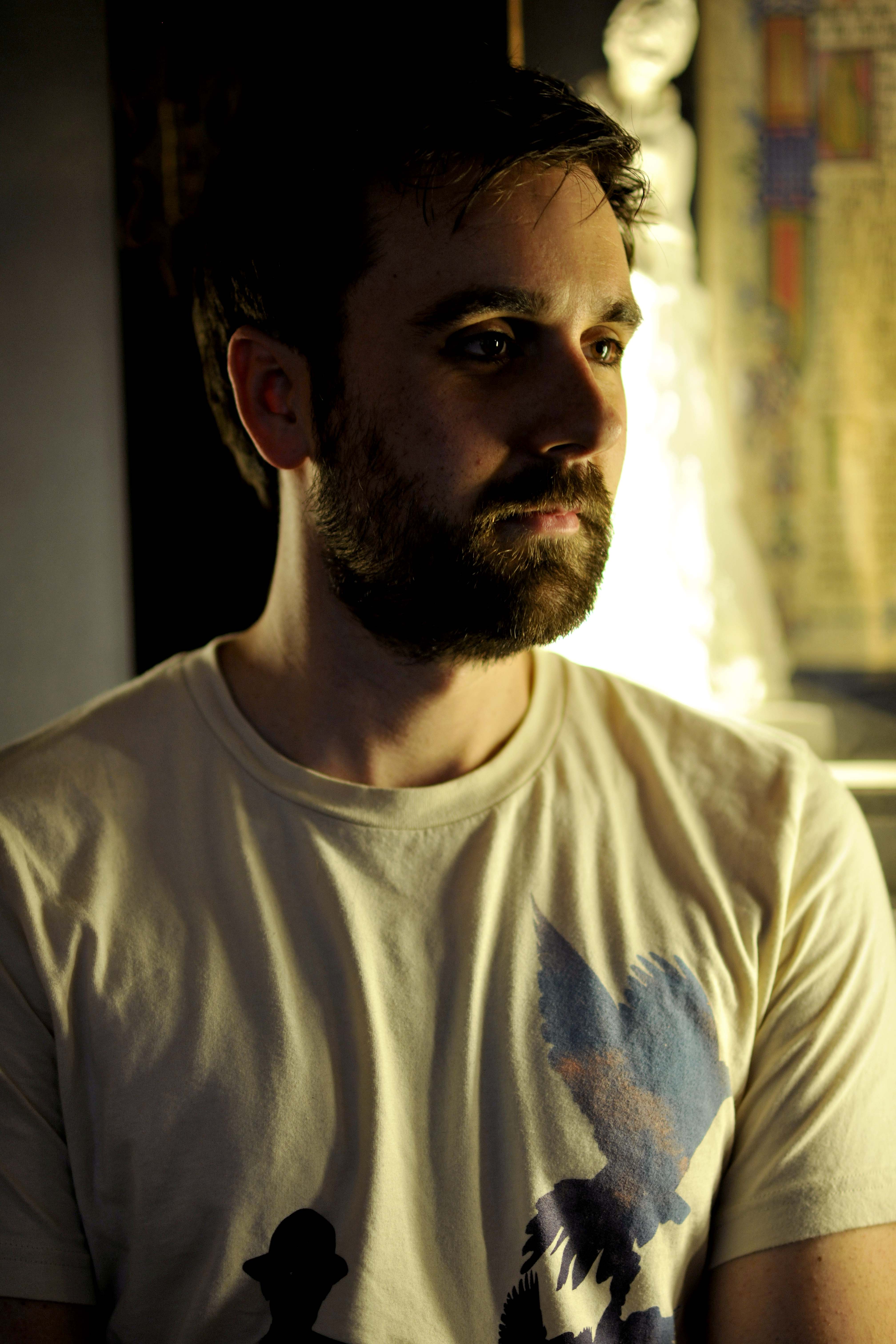 The piano chords really drew me to “When It Will Bloom”. I thought they had a charm to them. The bells at the end of the original track too. There was something simple and innocent about the sounds, like music from the perspective of a child.  It wasn’t nostalgia per se, but rather an atmosphere, like you were looking through a child’s eyes. As I started playing around with the track, I improvised some of the opening basslines on the Moog synth. The chorus bassline was a first take performance that I kept, even though it wasn’t perfect, just because of that first take feel too it. 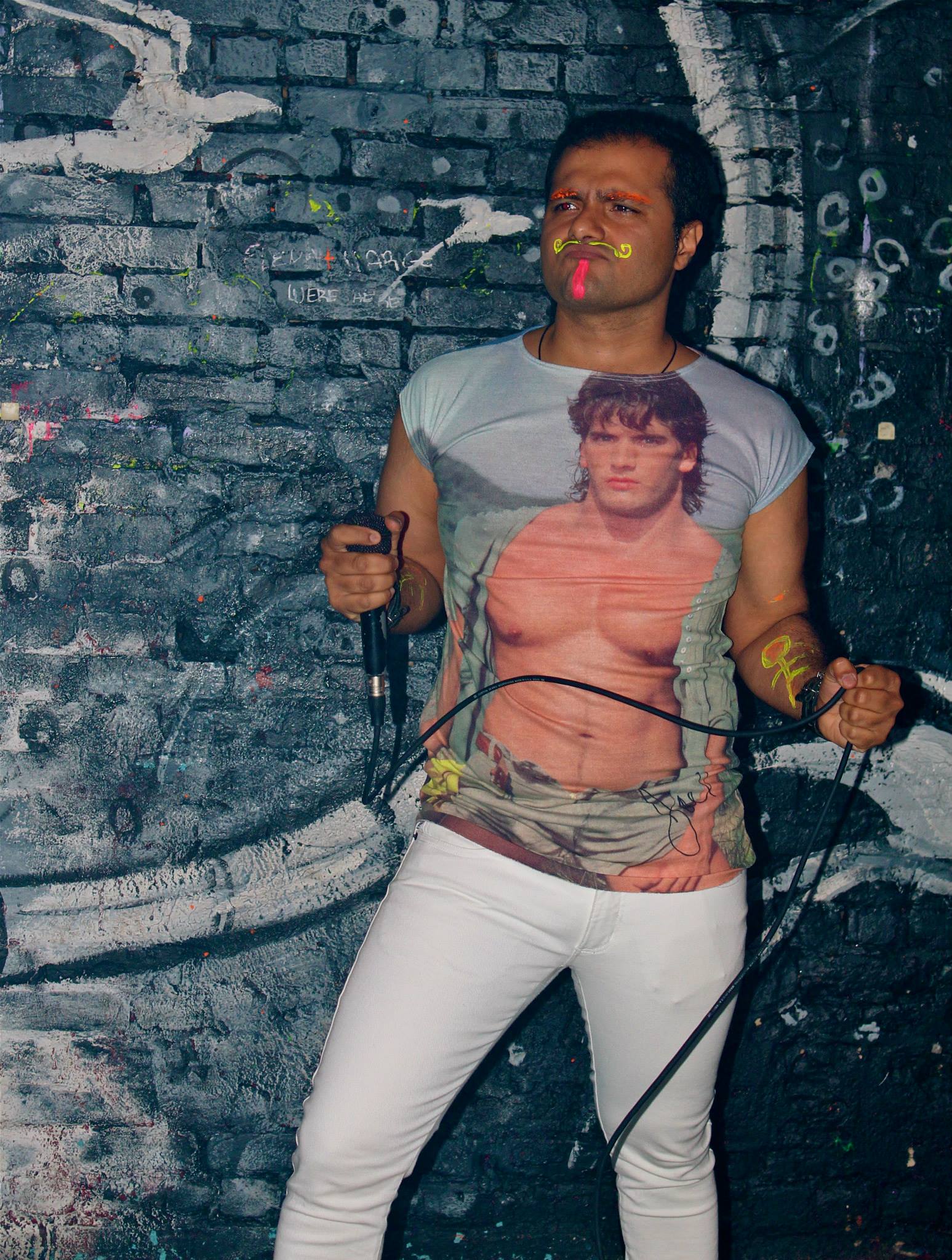 Naked Highway is glam electropop from NYC. The group’s remix credits include works for Lady Gaga, INXS, The Presets, Rihanna, Willam, Latrice Royale, Manila Luzon, Brandon Hilton and many others.  The duo is known for their rambunctious live show and dance floor friendly tracks, including the forthcoming singles “Never Cared” and “Call Girls”

I wanted to make this track *dance*…plus wasn’t it in a weird time signature?  No, no.  4/4 please.  Four on the floor.   I am no match when it comes to Michael’s synth and piano work, so I want to keep my version simple and hypnotic with a groove supporting all the ingredients for my disco soup. I imagine a video for this remix would be Michael in the center of a roller disco rink calling out to, nay…invocating (is that a word?) the skaters around him! 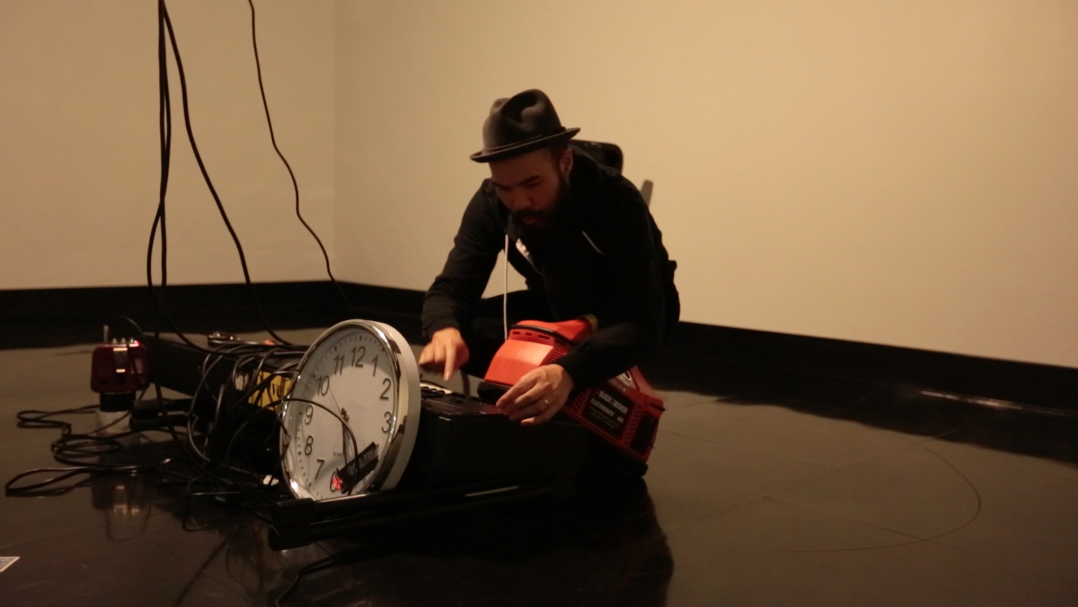 Tim Tsang is a conceptually driven composer/performer concerned with both visual and aural aspects of musical presentation. Floating between brute force and careful contemplation, Tsang’s work often explores the permeating relations between the trinaries of [Music, Sound, Noise] and [Time, ClockTime, Clocks]. Specifically, he is the developer of John’s Cage: an practiced-based initiative exploring possibilities of human/creative emancipation from Clock Time by the careful/carefree practice-based studying of Clock Time, which may result in live performances, videos, compositional concepts, lecture/performances, writings, discussions, and more. Learn more about Tim here.

Technically/musically speaking, I was very drawn to the chaotic, clashing sounds of various voices in the original version (near the end) – so spooky, beautiful, and encouraging at the same time? I thought it was wonderful, and definitely wanted to do something about it in the remix – it became a starting point/basis of sorts…

I guess the clashing voices resemble for me a set of somewhat conflicting voices experienced (especially) during a time of grief, which I imagine must be rather frustrating/tiring/confusing, to say the least! This frustration-fatigue-confusion, may be so wearisome that it becomes unreal – like a dream of sorts, having its own shape -> a life of its own. The dream, while beautiful at times, may perhaps cause a person in grief to be more and more inward-focused. The line “there are other people to be loved”, though, pulls the dreamer back onto his/her feet, ready to live life, while still retaining the capacity to dream in a healthy manner… 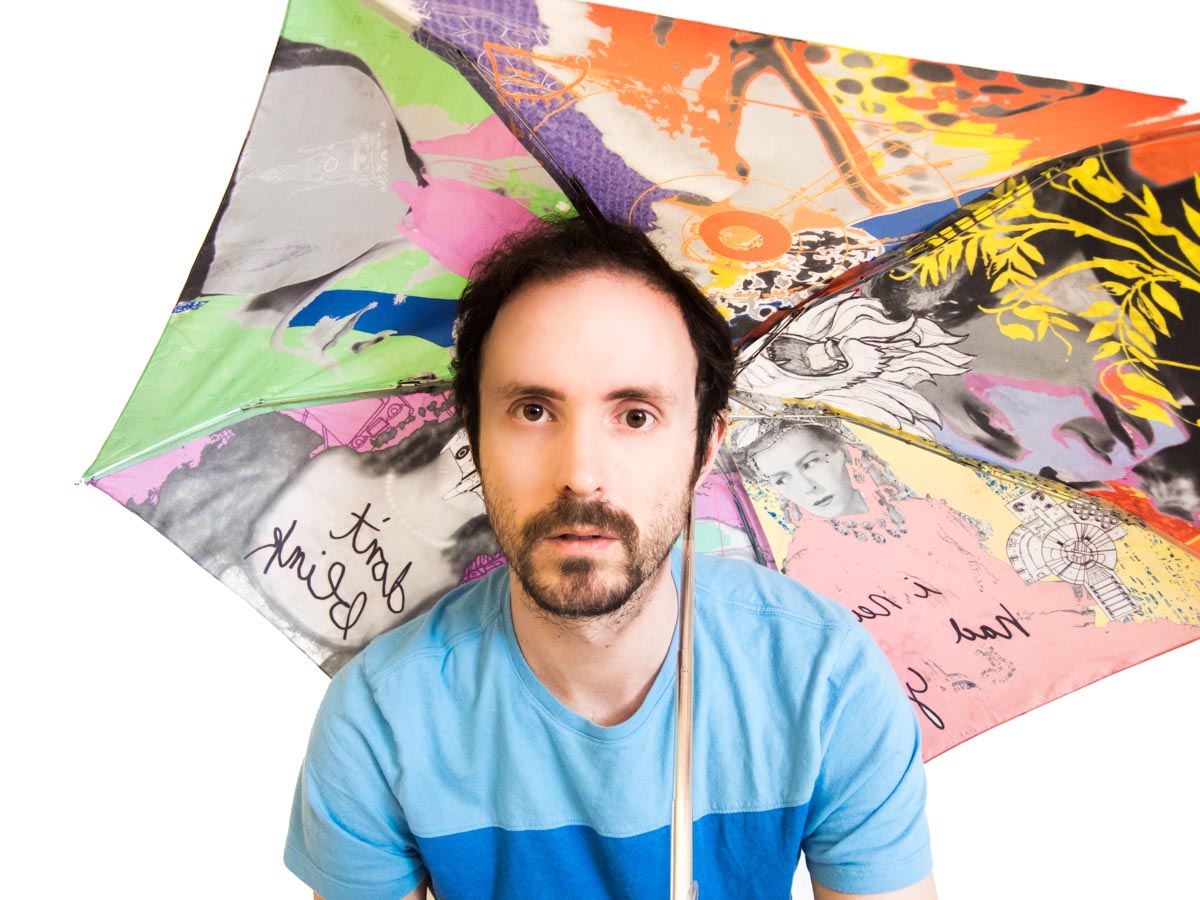 luke kurtis is an interdisciplinary artist whose work has been exhibited in galleries and alternative spaces around the country. His writing and photography has been published in numerous publications including Brown Rice, The Emerson Review, Georgia Backroads, Iceland Review, and Palaver. He lives and works in New York City’s Greenwich Village.

When I started working on the “Gone” remix, I wanted to honor the minimalism of the original piece yet somehow expand upon it. In my own work–audio pieces and otherwise–I’ve always been very concerned with repeating structures and layering elements. The “Gone” remix allowed me to explore those ideas by layering new elements on top of Michael’s original work, extending the texture and allowing the listener to explore the composition in a new way. 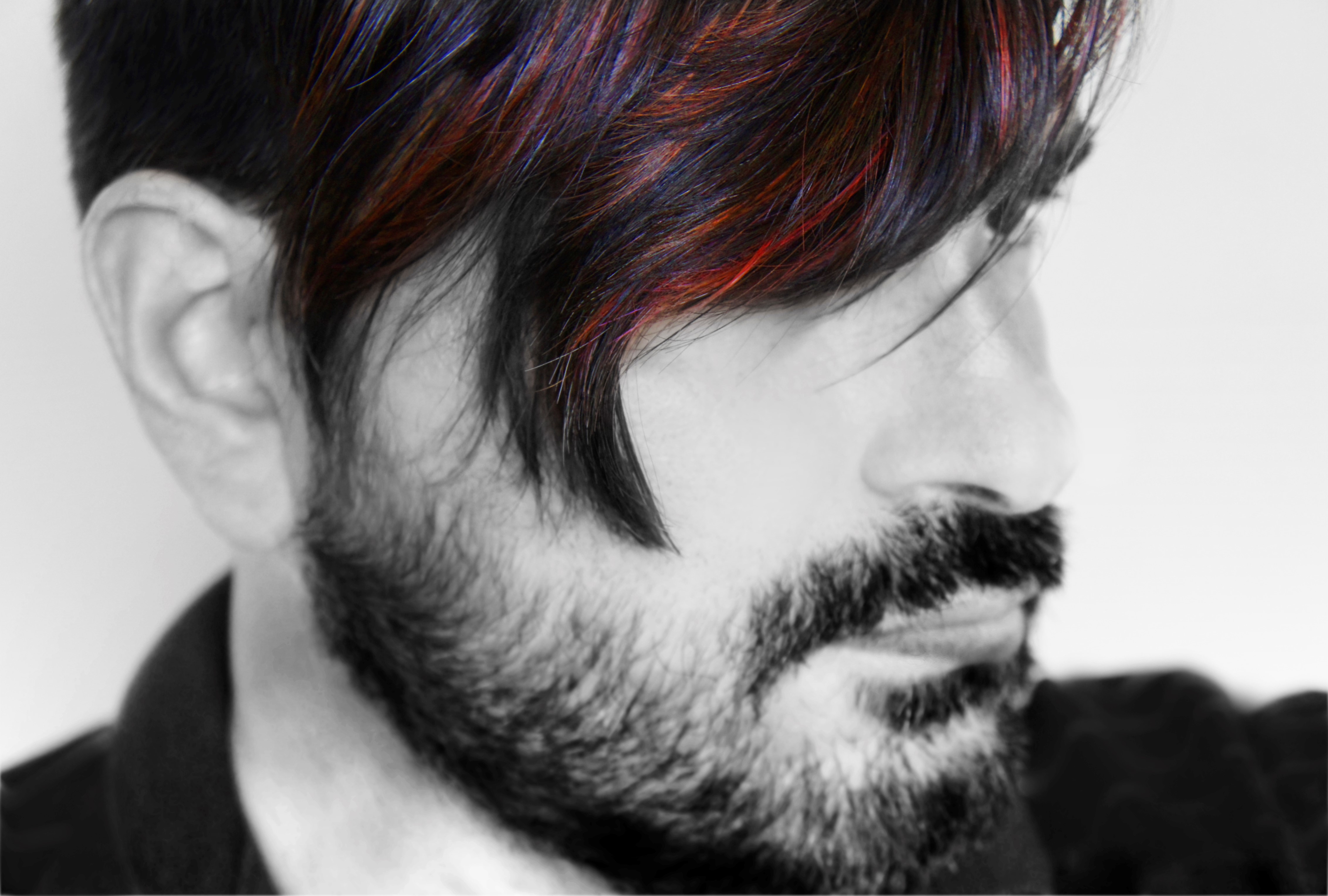 frank.ortiz is a native Houstonian who has been working in electronic music for over 25 years. He is a member of the electronic/electroclash band, PLID (Paul Lynde Is Dead) and has released his first solo EP on bandcamp entitled, frank.ep. The music is a modernist approach to the synthpop textures of the 80s. It is meant to be evocative, yet accessible to all. Feel free to check out my EP at frankmusician.bandcamp.com and the PLID LP “Dream Logic” is available at all digital retailers including iTunes and AmazonMP3.

The idea with my remix of “Invocation” was to create an electronic groove that was both danceable and relaxing. I also wanted to honor the three distinct movements of the piece which posed a challenge, but was fun to execute. 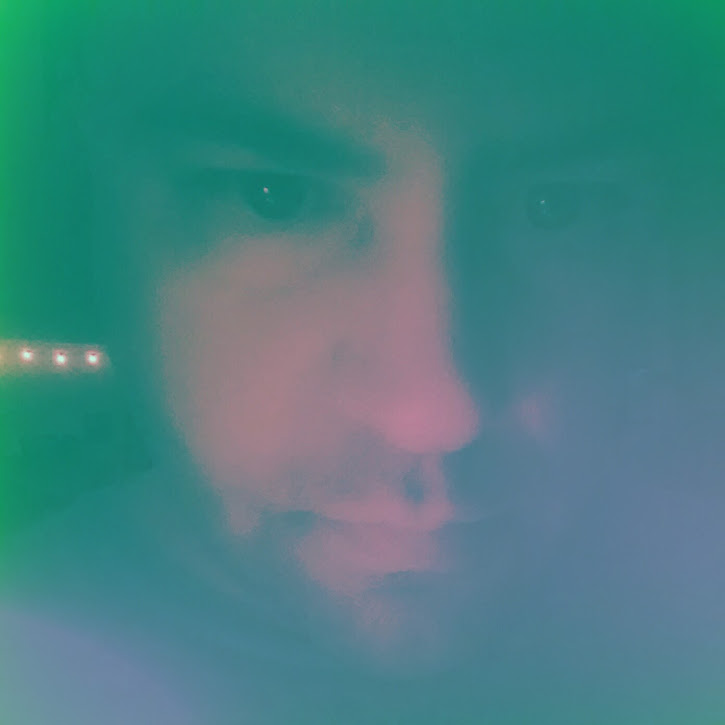 Jason Allen (Riverside J) grew up in Duluth Minnesota. He survived the long winters strapped to his guitar and his love of music began with his first guitar lessons at age 8.  His musical life took a turn in high school when his older brother introduced him to Aphex Twin and the power of bass music.  From that time he has tried to follow in the footsteps of his mentors Plaid writing music that is both melodic and powerful.

I picked mango to remix because I love that Rhodes sound and I also thought this might be a good chance for me since the song fits my own writing style to a degree.  After several listens the words that struck me most were in the opening line about being alone in New York and having just arrived.  For myself I focused on the theme of loneliness and tried to cherry pick parts of the spoken word that highlighted that theme to me.  Musically I wanted to keep the feature that attracted me to the song in the first place which was the keys sound.  I tried to emulate them as best I could and layered Michael’s original samples in with the new instrumentation.  The second part pulls a riff that Michael wrote originally as a more subtle or behind the scenes riff.  I like it a lot as a bell part which I also harmonize to make it more full and brought it out to be the main riff.

K.Chambers is an Multi-disciplinary artist from Dallas, Texas who now resides in Washington D.C. Most know him as Flash Frequency for his music but also lives a different life under the name Caleco Vision. His notable talents in multimedia is composing Collage Art and Ambient, Electronic Jazz, Hip-Hop and Experimental.

For about Ten Years now, Flash Frequency have always been behind the scenes, either its building an artist or independently putting instrumental albums out.

Lately, Flash Frequency have been doing 3D composition and creative directing the independent artist management company, Bombay Knox. While K.Chambers have been taking on multiple jobs. He is currently working on his next album Non Fiction and branding artist and companies in the DMV.

When i first heard the story in the song. I started to think about the time i lost step mother cancer which hit me very hard but never had a chance to decompress about musically. When the opportunity was open to remix the song and add my diatonic key scales to soundbed with drums. It made me feel a whole lot better as a dedication to my step mom on expressing my emotion to connect with her one last time. 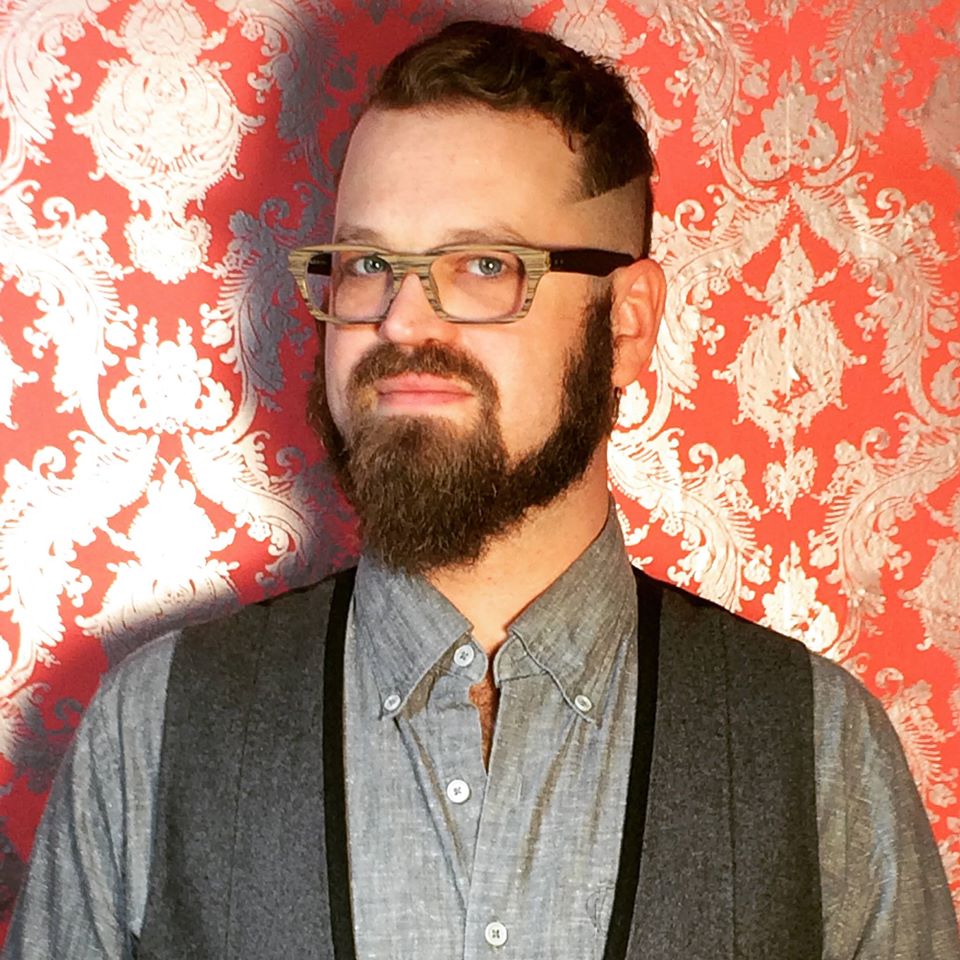 DLR – David Lee Rotten is a Brooklyn based singer, songwriter, producer and filmmaker. As a solo artist and as half of NYC’s electro-pop outfit Naked Highway, he is no stranger to the charts or the dance floors. His production credits include hits by Tony-winner Levi Kreis, Parralox, Brandon Hilton, Brit-pop star Francine, RuPaul’s Drag Race superstars Manila Luzon, Latrice Royale and Jinkx Monsoon, and many more.

The first time that I heard “Go”, I was in tears. Michael Harren put so much love and passion into this touching tribute to his late mother. I listened again and repeatedly shared it with friends and family. When Michael started planning this remix project, I immediately asked to put my spin on this beautiful piece. I kept the vocal and the cello, adding my own warm electro vibe to the rest of the remix. It is an honor to be a part of this project and to get to add my talent to a beautiful song like “Go”. 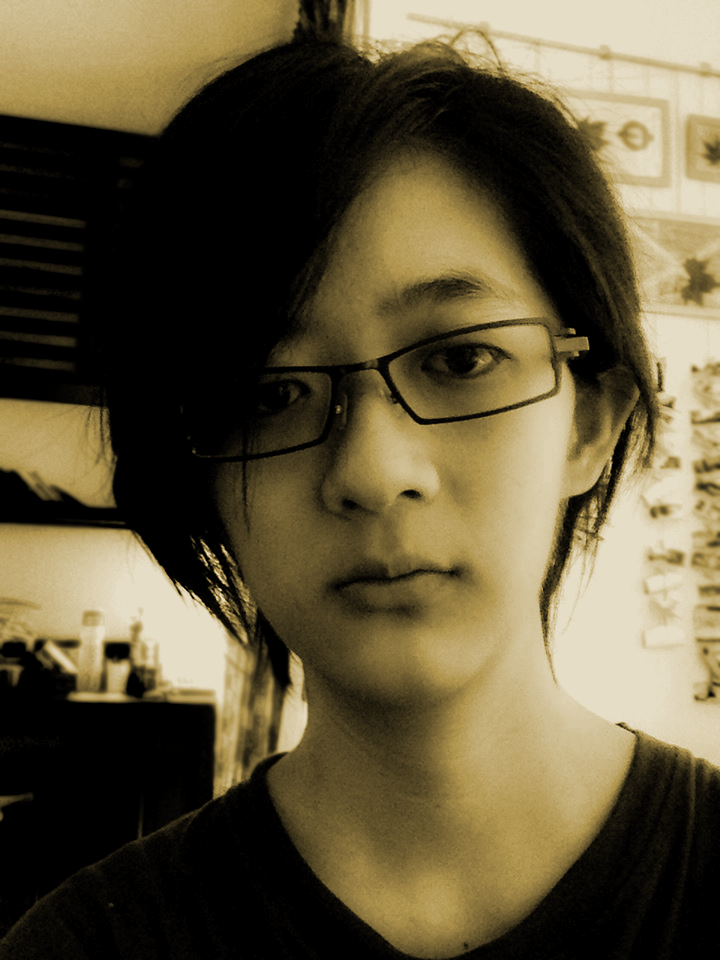 Based in Singapore, composer and sound artist Lydia Ang brings to the table an extensive melting pot of music influences. A Calarts alumni, she has worked with artists from all over the world on multidisciplinary projects in music, film/animation, dance, theater and digital media. Driven by her belief in music as a powerful form of expression and a catalyst for deep human connections, she makes it a point to be thoughtful, thorough and open throughout her compositional process with a vision for the piece to arrive, in the end, at its most honest form. Visit Lydia’s Soundcloud here.

Present in the original track is a character of intimate simplicity that tells an emotional story.  I found myself wanting to preserve that quality, and at the same time, wrap my influences around it in an organic fashion. It turned out that the influences that shape this remix came in the form of sonic representations of my contemplations while listening experiencing the original track. 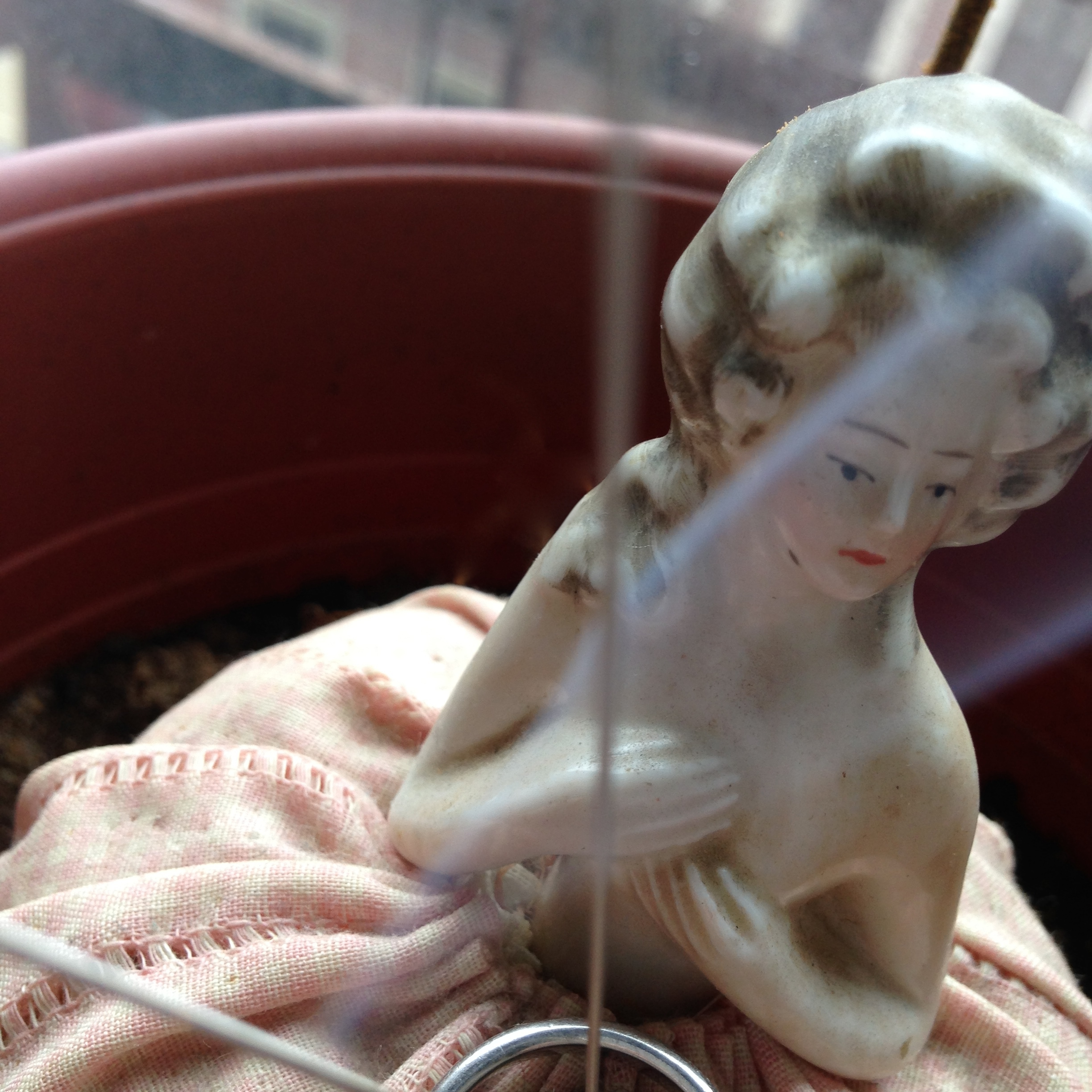 Embracing the principal that “humility is endless,” there is no quest for perfection in Andy Moore’s work – rather the pursuit of imperfection that rings true, movingly, and tunefully in the lives of listeners. With raw emotion at the core, coupled with the willingness to pay the high costs in pain, for the benefits of love, it seems only appropriate that his umbrella project bears this name. 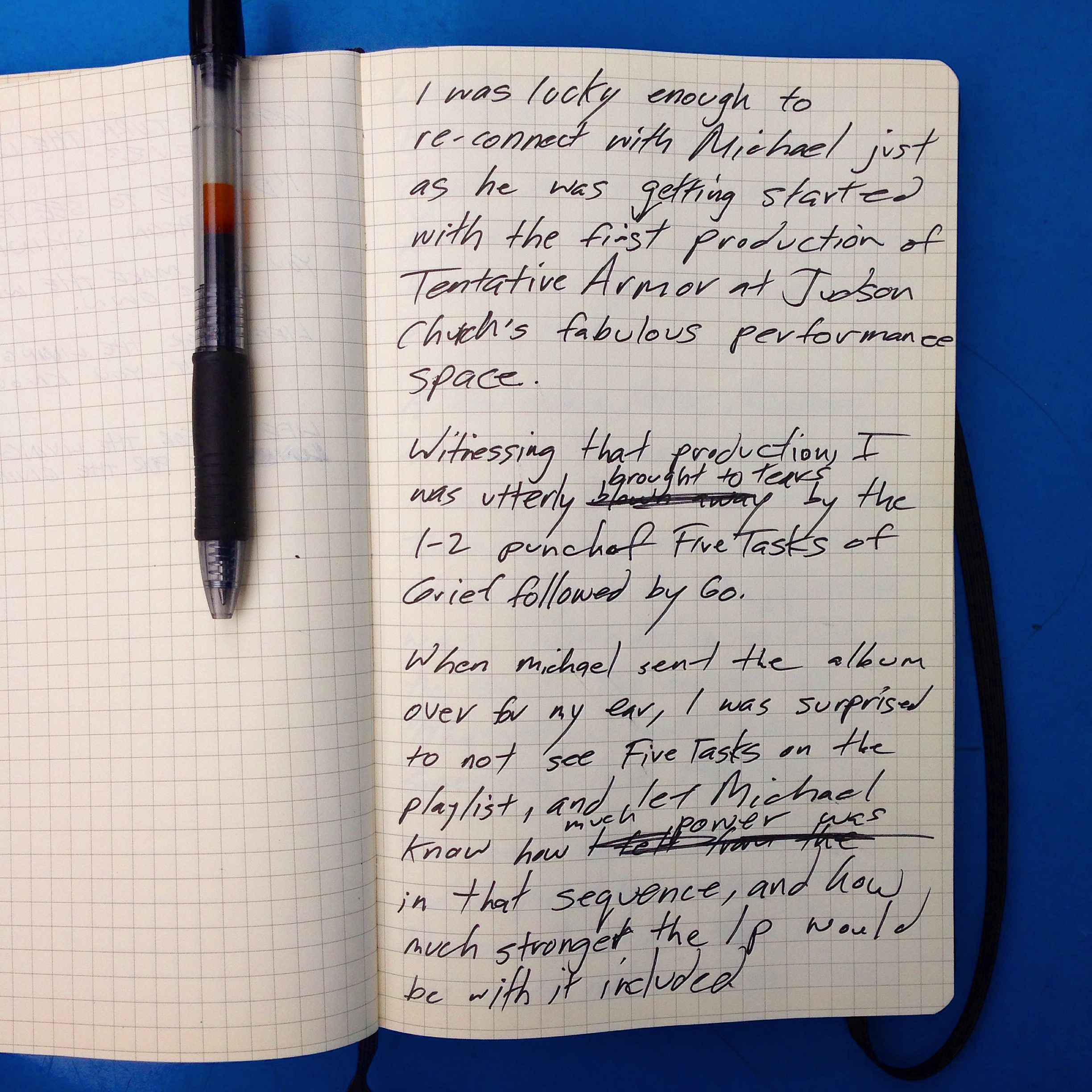 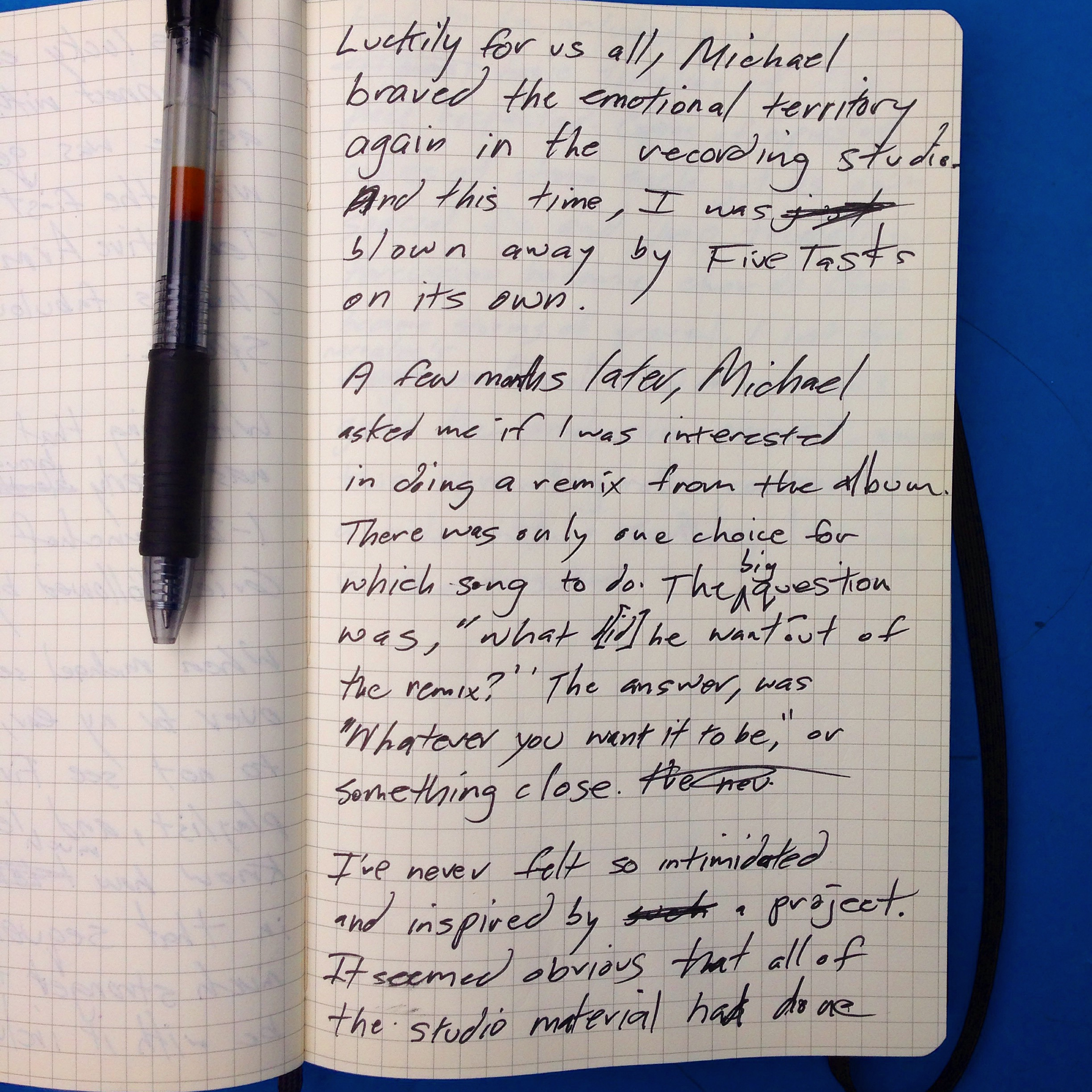 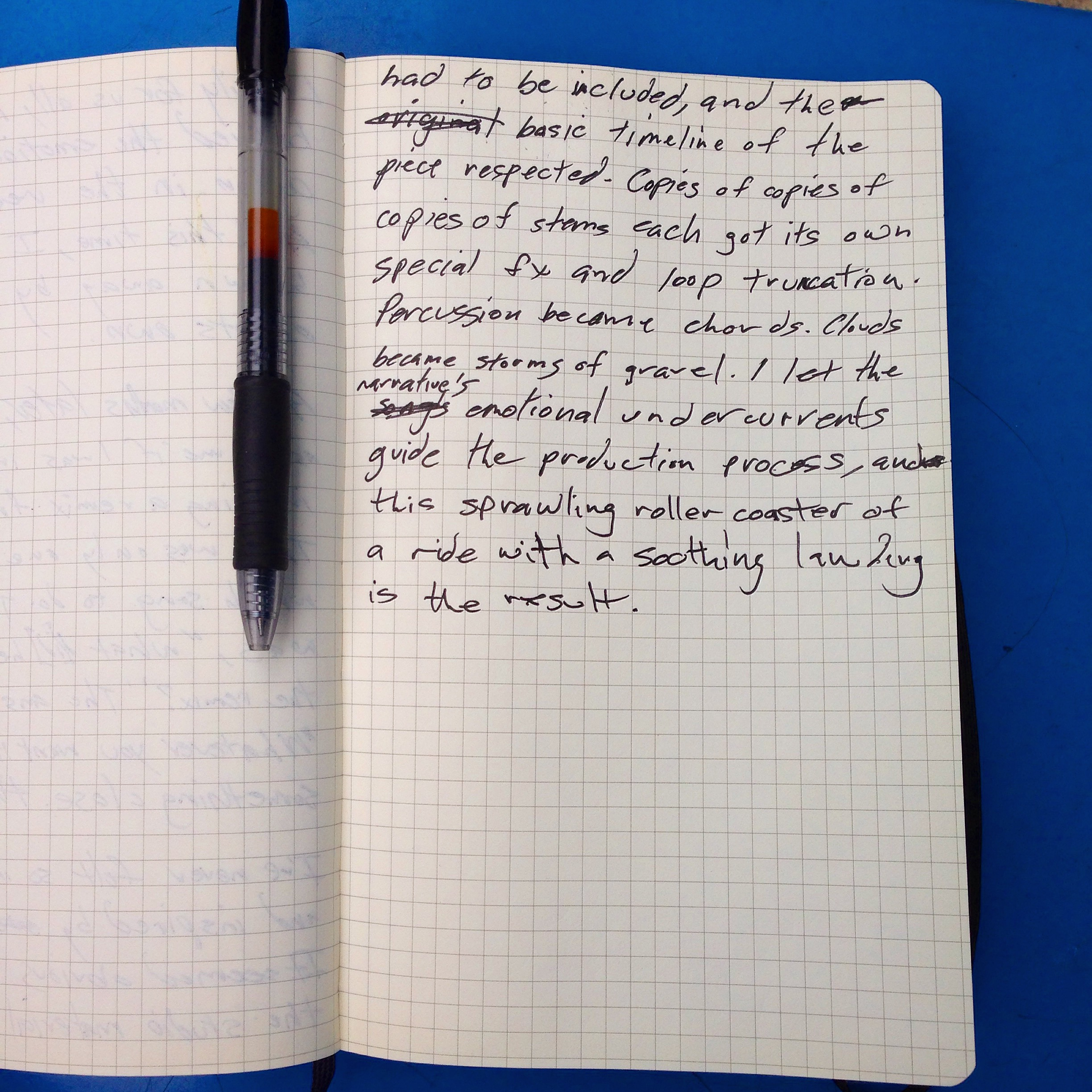 The One With The Vision
Next Post:Tamerlaine Farm Animal Sanctuary Residency