It’s been just over a week since the final performance of my solo show, The Animal Show, and I feel like doing a little reflection on how it all went. All in all, I am pretty thrilled with the experience. I had great crowds all three nights, and it’s always a blast to perform at Dixon Place. The staff is outstanding and the space is perfect. I got some great press (Huffington Post, Vegan Future Now, Broadway Box, and this great review in Theasy!) Oh, and Sandra Bernhard came to the show, tweeted about it and talked about it on her Sirius XM show. Rock!

I feel really good about how the show went. I had some ideas that didn’t quite come to fruition, but I think that is the nature of solo shows like this, especially when I am working all of my teaching gigs while prepping the show. My director, Adam Fitzgerald, and I will be chatting soon about how to move the show forward. My original thought was to knock out these three performances, make an album, and then move on to the next thing. I had already started thinking about extending the “in-residence” concept into the summer — details on that later, but I am working on traveling to some different sanctuaries around the country and writing some more material. Say a little prayer that I get some of these grants I have applied for!

While on the topic of money, let’s talk about what that was like for the show. More than a few people asked if the proceeds of the show would be going to Tamerlaine Farm. That question surprised me at first, because I forget that people don’t really know that putting up a show like this is rarely a money making proposition. Not for an artist at my level, anyway. I kept a budget pretty closely this time around for the purposes of grants (I got three of those!) and my taxes at the end of the year. One of the grants is a reimbursement grant, and it’s still unclear which expenses they will actually reimburse me for, so this doesn’t reflect that. I will update this post as things develop. Here’s what it looks like so far: 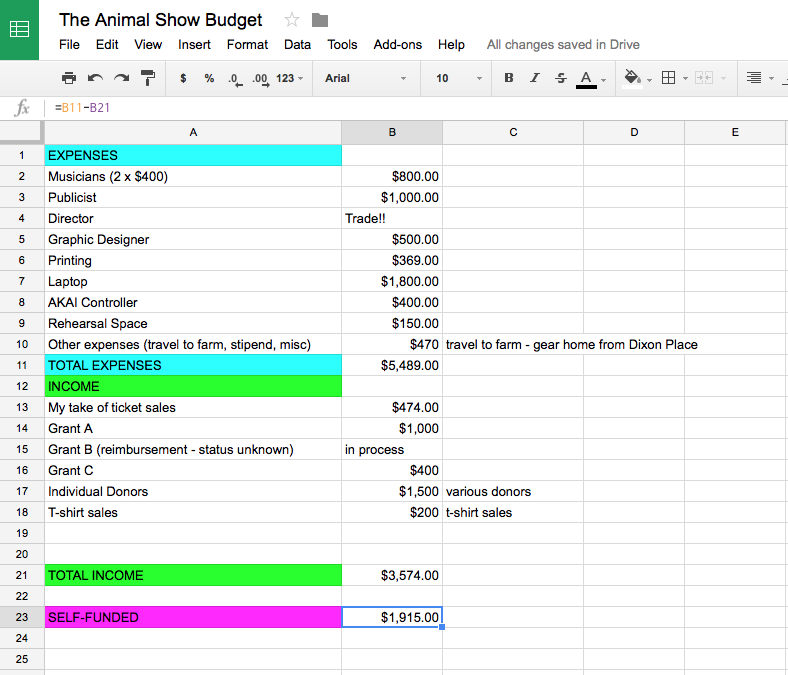 That reimbursement grant is $2000.00, but I don’t have a lot of hope that I will see all of that. If I do, though, I will have made $85! That’s cool, but the flip side of that is that I spent hours working on the show: writing, rehearsing, programming, scheduling, distributing flyers, working at the farm, etc etc etc. I would absolutely do this again, and I value the process of creating and the performing. I’m also beginning to discover that this is an incredibly effective extension of my activism. I’m not complaining at all, but I think it’s valuable to let people see what the financial side of this is, especially since I am working so hard to bring people into my patreon community and will probably crowdfund the book/album project when it comes around to that.

So, thanks to all of you who came to the show, contributed cash, listened to my overwhelmed meltdowns, or just clicked “like” on some Facebook post or other. I feel really supported by my community, and I feel like a valuable artist after this. I can’t wait to see what happens with the show after this! I have been churning out a bunch of videos on my YouTube channel, and I am rolling the podcast back into motion as well. Be sure to check those things out. Always free for the taking!

Thanks to Marc Wood for this photo I swiped from his Facebook page without asking. <3

One thought on “Looking Back at The Animal Show”