I am elated by the feedback I have been getting about The Animal Show, both from people I know and great reviews like this one. Lots of people have been asking me if I am going to do it again and the answer is a resounding “HELL YES!” I’m excited to share with you the seeds of the plan to remount the show, but first, I promised an update about the budget.

In this blog entry I reflected on the show, and the specifics about its budget. I was inspired to share these details by the questions about were the proceeds would go from the show. Short answer: “what proceeds?” I got the final word about the reimbursement grant I was waiting for, and they awarded me $869.00. That was a little bit of a bummer because I’d hoped for closer to the $2000.00 they had originally awarded. They were very clear from the start, though, about what they would reimburse me for, and many of my expenses were not on that list, so I don’t have any hard feelings toward them at all. 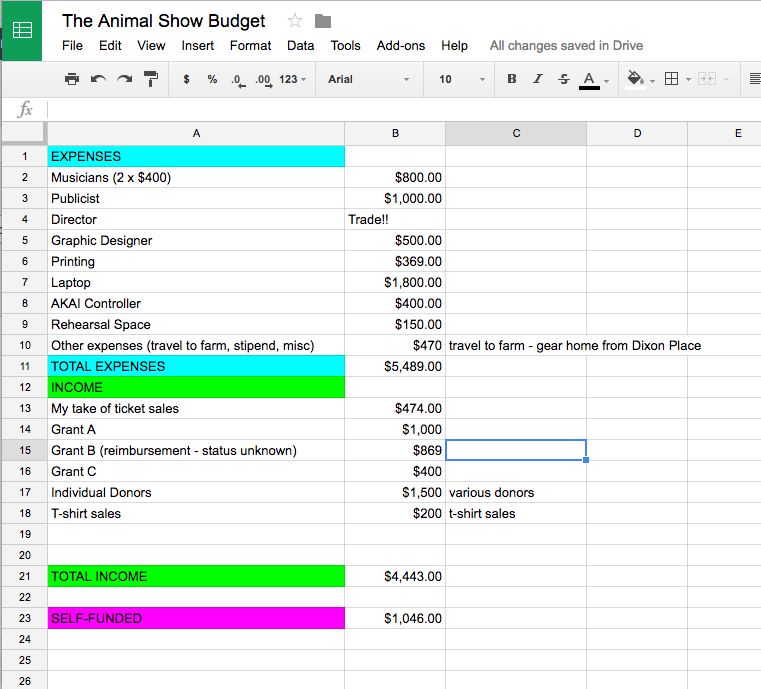 My final cost to put up the show was $1046.00. This bummed me out at first, but after sitting with it for a while I have a lighter feeling about the whole thing. A couple of the things I included in the budget: the laptop and MIDI controller, are tools that I can continue to use moving forward with my work, and they are expenses that won’t exist for the future productions of the show. The other thing that eventually cheered me up is the realization that I am still a pretty inexperienced solo artist. This is only my second solo show, so the fact that if got any grants at all for my work is pretty outstanding, not to mention the fact that I now have some loyal patrons on my Patreon page who are invested in my work and believe in what I am doing. The final boost I needed was a legendary chat with my new friend Nate Maingard about why in the hell we put ourselves in this “no promises” world of being creators, and the truth about what a gift it is to share with the universe in this way. You can hear the whole thing on my podcast interview with him. This interview was next level soul-inspiring. Seriously, don’t miss this.

Adam (my esteemed director) and I met a few days ago to discuss the future of The Animal Show. We agreed that there is more to add to the show, so… here we go! I am going to start expanding the existing string arrangements, digging into working with video, and fine tuning the existing stories and sounds from the show. Most exciting: I am planning a sanctuary tour for the summer. I am going to take July and August off from teaching in NYC and travel to animal sanctuaries around the country to volunteer, meet more animals (human and non), and gather more experiences for the show. I am seeking out further opportunities as well to work with activist and animal rescue groups.

During this tour, I’ll be performing The Animal Show wherever I can. It could be a performance in a theater, or maybe a house concert at a sanctuary. I’ll document each week of the tour with a new video about the sanctuary and featuring a new piece of music and/or text inspired by that week. I am really so excited about continuing this work — I’ve long wanted to find a way to combine my animal advocacy with my creative path, and this really seems to be a good fit. I am just in the early stages of planning this, so hold tight for more details. The big goal at the end of this is to remount the expanded version of The Animal Show in New York City in the Fall of 2017. Pshew!

The more I stick with this “being an independent artist” thing, the more I realize that I must cultivate an exchange between myself and the people who find value in my work.  Patreon has provided what I think is the perfect platform for this exchange to happen. As I roll into my summer of volunteering at sanctuaries, rescuing animals, and creating new work, my patrons will be instrumental in moving this work forward.

In case you haven’t checked it out already, you can think of Patreon as a longer term Kickstarter. Instead of funding one big project, you can fund an artist’s ongoing work. This is perfect for something like what I am doing, an extended project that requires a substantial amount of time and resources to create. You can make a monthly pledge for as little as $1 a month in exchange for various rewards that are broken down on the page itself. You can check it all out here. I will be revamping the rewards as we get closer to the trip itself, but if you pledge now, you’ll have access to those newer rewards as they roll out.

Here’s a video about how Patreon works, but please let me know if you have any other questions. I’d love to have you over there.

Whether you are a patron, bought a t-shirt, downloaded a song, subscribed to my podcast… even if you have done none of those things, you have read this far and your curiosity about what I am doing means the world to me. Thanks for being here, and thanks for doing the thing that you do that makes the world a better place.