END_OF_DOCUMENT_TOKEN_TO_BE_REPLACED

As you may recall I worked with Tenlegs Arts and Media Network to gather some producers to remix my album. I had a really great response, and added to that group some musicians I deeply respect. here we have it! Tentative Armor Reworks has arrived. I am really so thrilled with how this came out. Christopher Willits at Overlap Studios in San Francisco mastered the tracks. I think he is a genius and felt so honored to have him work on this project as well. Graphical guru John Ong designed the cover art. Always a pleasure to work with that guy! Read on for some information about each of the artists and their process around the work. Oh yeah, you can download the entire album for free right here. END_OF_DOCUMENT_TOKEN_TO_BE_REPLACED

Chris Buck’s “Five Tips For Becoming a Professional Photographer” came across my newsfeed a few days ago, and while I am not striving to become a professional photographer, I’m drawn to posts like this.  I am always curious about what working artists have to say about how they got where they are.  I found this quote especially compelling:

“It seems that there are two kinds of people in New York, those with a vision, and those without who work for peanuts for those who do.”

END_OF_DOCUMENT_TOKEN_TO_BE_REPLACED

Life has been a whirlwind of…well… horsepuckey, honestly, for the last 6 months or so, but I am back on top, in a great new apartment, and occupied only with projects that bring me fulfillment and/or cash. I’m a little overwhelmed with how to update, so I will fall back on my ADD-addled mind’s best friend, the bullet point. END_OF_DOCUMENT_TOKEN_TO_BE_REPLACED

I released the Tentative Armor album and book under a Creative Commons license because I really love the idea of people taking my work apart and putting it back together as they see fit. With that in mind, I decided to try something new. With help from Tenlegs Arts and Media Network I am releasing all of the stems for each track on the album and inviting people to create their own remixes. The final result will be professionally mastered and released for free under a Creative Commons license through my online shop.

If you’d like to participate, create a Tenlegs account (if you don’t have one already) and then stop by the Tentative Armor Project Page. There you’ll be able to listen to the album and decide which track you’d like to remix. Once I add you as a collaborator to the project, you’ll have access to download everything you’ll need from the various pages within the project. I’d love to have the finished remixes no later than February 15th. END_OF_DOCUMENT_TOKEN_TO_BE_REPLACED 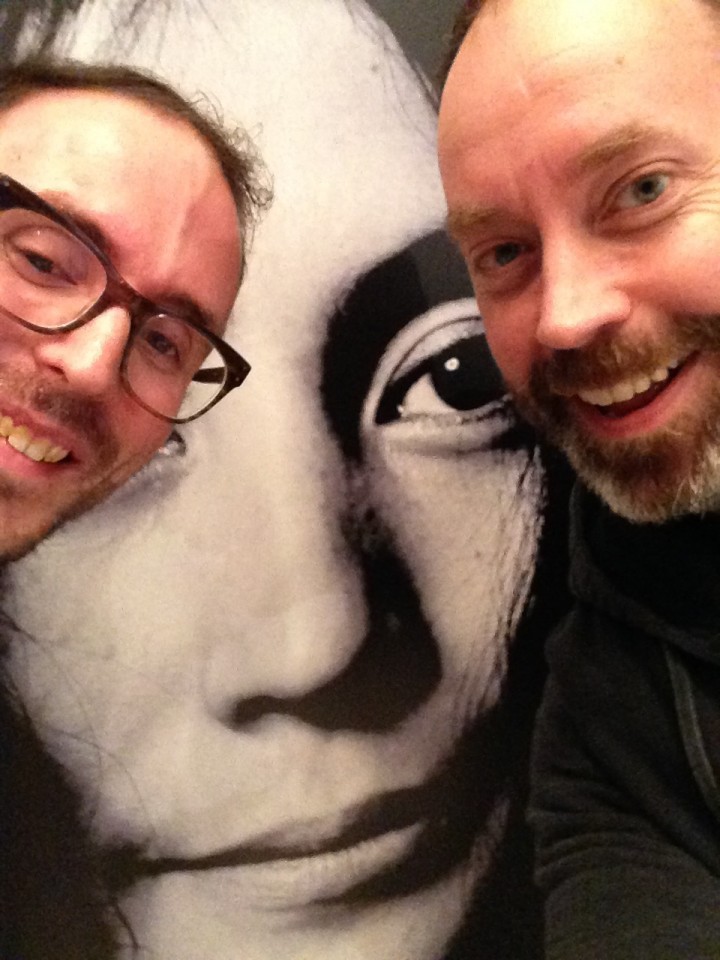 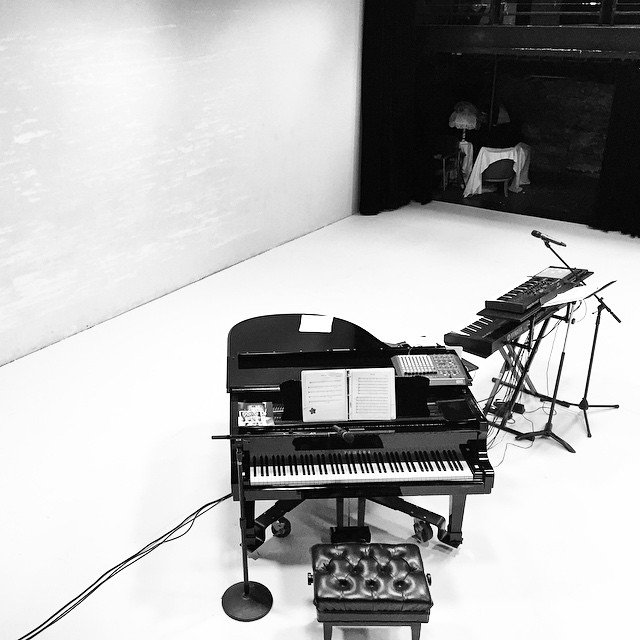 luke kurtis took this photo during tech at Dixon Place.

I had a blast at the Tentative Armor Album and Book Release show last Tuesday at Dixon Place. It was amazing. The process of producing the album and book and then coordinating everything for the show was too much. I don’t know if I have ever felt so overwhelmed.  I kept joking with people that I was dealing with it by taking lots of naps. But I wasn’t joking, really. I thought maybe I was depressed, but really.  It was just so much. So many naps. So much panic.

Anyway, I made it. I finished writing the piece I used to open the show with my string players the morning of the show. I also got everything running on my laptop that morning as well. I cut it all so close, but by the time the show was about to start I just dove in and had fun. Thank you all for being there, and thanks to the bevy of people who helped out throughout this whole process. 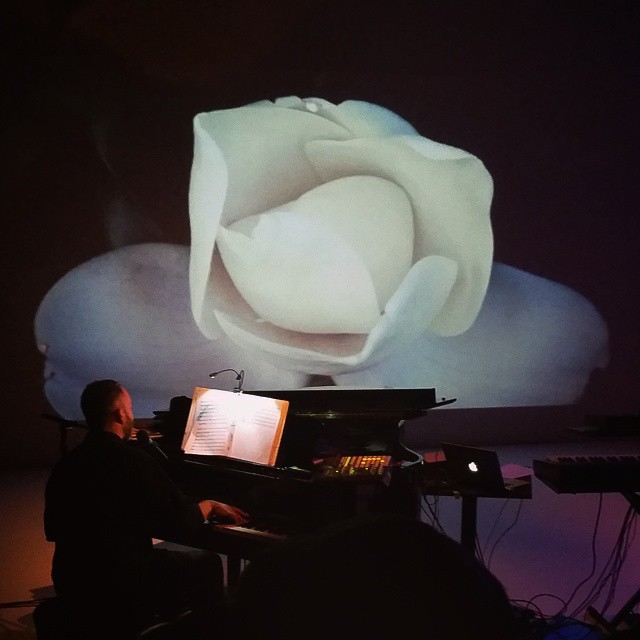 “When It Will Bloom” photo by Melissa Hsiung

I especially want to thank luke kurtis. It was his idea to make the Tentative Armor book (buy it in my online shop, Amazon or iTunes) which inspired me to go ahead with the album. I couldn’t imagine what an album based on my show would be like, considering the various types of music in the show. Having an accompanying book, really pulled the whole idea together. luke’s video installation for the release show brought a particular magic to the show, I don’t think I could have achieved otherwise.

A kickstarter update: I will have download codes for you all soon, those who are entitled to a download of the iBook that is. I am currently waiting for the t-shirts, truth be told, I just ordered them today. I apologized for that delay before, and here it is again. I went over my budget for the project, so this last bit had to wait until I had the cash on hand. I hope you all understand. I hope to send out everyones rewards (books, CDs and t-shirts) in the next couple of weeks.

So, there we go. It’s all made, this first biggest project ever made…by me. It’s so nice to have this under my belt. Thanks to everyone who helped make it possible.

Things are really moving along with the release of the Tentative Armor album and book, this is such overwhelming fun! Last week I was totally zombie-fied with everything that needed to happen, but now that things are in action and out of my hands, I am excited! 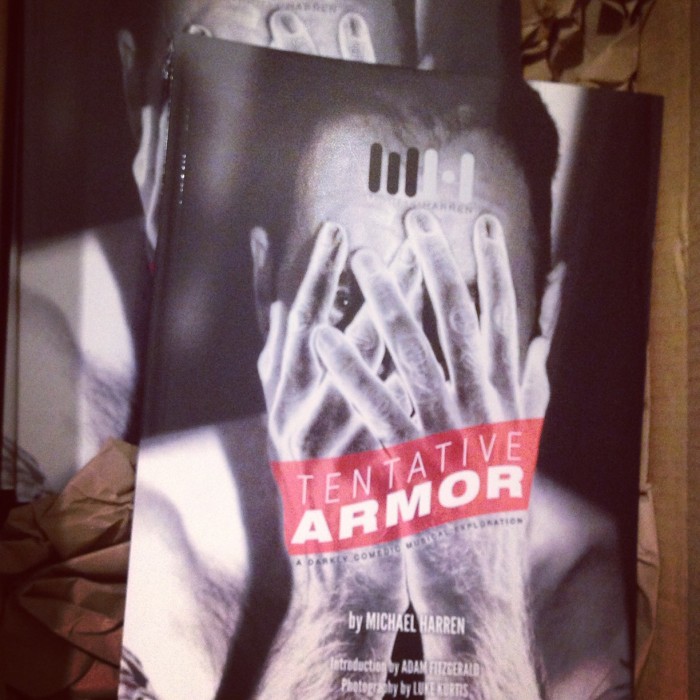 Thanks to luke kurtis‘ diligence, I already have a big box of Tentative Armor books. I uploaded all the mastered tracks to CDBaby, Bandcamp and OasisCD to get all of the digital distribution and physical CD production underway. The mastering took much longer than expected so I am going to be getting the CDs the day before the release. Unfortunately, that means that I’ll have to send books and CDs to Kickstarter backers after the release, but you’ve all got the download now, so hopefully that will tide you over. 🙂 I have learned so much about this process, the places where I should have allowed more time, the places where I should have planned on spending more money in order to have awesome-er people working on this.

Those of you who didn’t back the Kickstarter, you can pre-order the iBook here, and pre-order the book, cd and album download on my Bandcamp page.  Note that pre-ordering the download will give you an immediate download of the track, “When It Will Bloom.”

I have a couple of new pieces I am working on for the release show at  Dixon Place (tickets here!), which I am pretty excited about.  A couple of new stories and maaaaaaybe another piano and string piece if I can get it all together in time.

So, yeah. It is all exciting and sort of unreal that I am suddenly creating all of this stuff and that all of you are cheering me on. Thank you!